Keeping Up with Keara

Hi, friends! It’s been awhile since I’ve posted on the blog and boy have I missed it. I can’t really explain the almost four-month hiatus, but I guess that’s life. I spent the past couple of months focusing on myself, my friendships, and everything else in between. July, August, September, and October have been filled with long nights, new friendships, lessons learned and celebrating my “Taylor-year” birthday. Most importantly, the past couple of months were filled with memories that I’ll never forget. Although my blog has been lacking attention, my writing hasn’t ceased a bit. It feels good to be back on the blog, but for now, I just want to share some pictures and small stories from time away…

One thing summer 2019 taught me was that everything truly does happen for a reason. As my sorority’s chapter president, I was sent to Las Vegas, Nevada for Tri Sigma’s National Convention. The month of June was tough, so the timing of my trip worked out perfectly… I was able to get away from home for a while and explore a new part of the country. I was rooming with a stranger that became an instant best friend, and met an amazing group of women that made my week in Vegas unforgettable. We walked around Vegas until our feet felt like they were going to fall off, splurged on strawberry daiquiris, laughed until our stomachs hurt, attempted to win big in the casino, and ate our hearts out. This trip was the breath of fresh air that I needed during a time when being at home and stuck in the same routine began to weigh a girl down.

The month of July was filled with days on the beach and trips to breweries with my friends. I just wanted to share one of my favorite outfits that I took with me to the beach. I went for the Jackie Kennedy look with this yellow and white gingham dress from Tommy Hilfiger. I found this dress from T.J. Maxx and I snabbed it right off the rack as soon as I saw it. I love wearing dresses in the summer because I can slip on some comfy shorts underneath and pair it with my go-to Jack Rogers. I have a couple pairs of Jack Rogers, but my platinum pair are my favorite! I’ve had them for almost 5 years and they are still a staple in my closet during the spring and summer months. My pinterest feed is usually filled with pictures of Jackie-O, so she inspired my new obession with the tortoiseshell sunglasses over the summer.

Bear Chase Brewing Company quickly became one of my favorite spots to visit over the summer. The atmosphere was great and the drafts were even better

It’s a weird feeling to be a senior in college… Most of my friends know what they want to do post graduation, but I feel like I’m in a phase where I’m still wondering what I’m going to do tomorrow. It feels nice to not know what I want to do with my life — I have options. I always think about Charlotte York, from Sex in the City, when she says, “You’re 22. What do you know about life?” I think most people get so stuck on this “5-year plan” they make-up in their head before college and then don’t allow themselves to change or find interest in other things. I’m still learning about myself and my career aspirations, and one thing I won’t do is settle for a career because its “safe.” But for now, senior year is going well and I’m excited to see what the rest of the year has in store.

I celebrated 22 by popping open a bottle of champagne and singing “22” by Taylor Swift to the point where my lungs couldn’t handle another note. 21 was fun, but 22 feels pretty nice too.

Hopefully my next blog post comes out sooner than this one. Leave me some comments or send me some messages and let me know what you would like to see on the blog next… 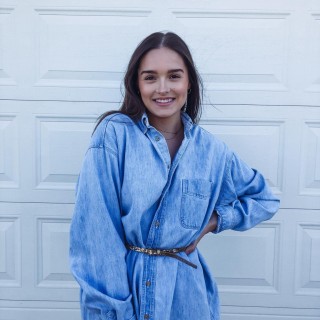